The emergence of virtualization started a new era of modern computing with improved system utilization, applications decoupling from the underlying hardware, and enhancing workload mobility & protection. Virtualization in both forms, Container and Virtual Machines allows multiple operating systems to run on a single physical machine.

Even though containers expedite rapid, agile development, questions are still raised on how they differ from virtual machines?

Containers and virtual machines -two distinctive approaches to set up multiple and segregated administrations on a solitary stage, where a Container framework requires a crucial OS that offers help for the separation; then again, a VM has its own OS utilizing VM support hardware. 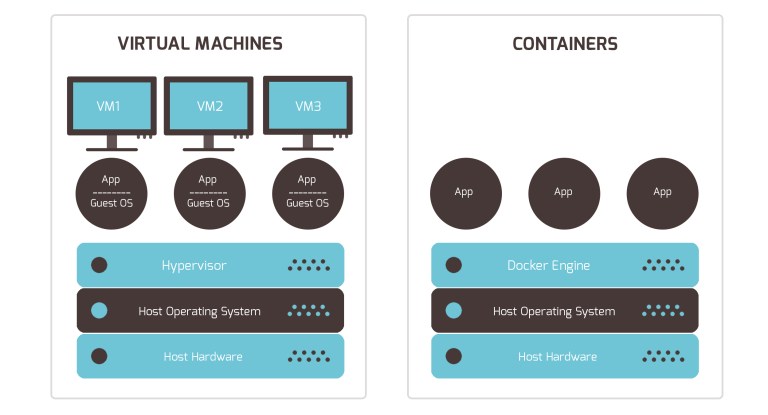 What are Virtual Machines?

A Virtual Machine is a software/firmware that sits between the OS and the hardware to virtualize the server. Each VMs runs on its own unique OS, and VMs with the different OS can be run on the same physical server. Along with VMs comes a software component named a hypervisor, which acts as an agent between the VM environment and the underlying hardware and provides the necessary layer of abstraction. The size of the VMs can be in gigabytes as each VM has its own libraries and applications that it services and they need a guest operating system to run. This quickly adds up to a lot of RAM and CPU cycles.

Containers provide a way to run the software predictably and on a single server/host OS when moved from one server environment to another. Containers share the host OS, its binaries, and libraries too. Shared components of a container are read-only, which makes it extremely light. The highlight of containers is their speed and lightweight nature. In addition, many more containers can be put onto a server than onto a traditional VM.

Though it seems to be the same, containers and VMs are unique in their own ways. Let’s see the difference between them.

Just because containers are more popular these days, doesn’t mean VMs are outdated. There is a lot more to VMs than just how many apps you can put in a box.

Containers do come with their own disadvantages; the main one is security. Reports say that more than 80% of all cyber-attacks are specifically targeting software applications rather than the network and any attack targeted at a container can cause the entire network to crash.

The smartness of a container is breaking deployments into more functional discrete parts, but that also means that we have more parts to manage.

What to use – Containers or Virtual Machines?

You can use a container if your requirement is to run multiple copies of a single app, say MySQL, but keep a tab on the security of the containers. If you want the flexibility of running multiple applications, you can use a virtual machine.

If you want the flexibility of running multiple applications, you can use a virtual machine.